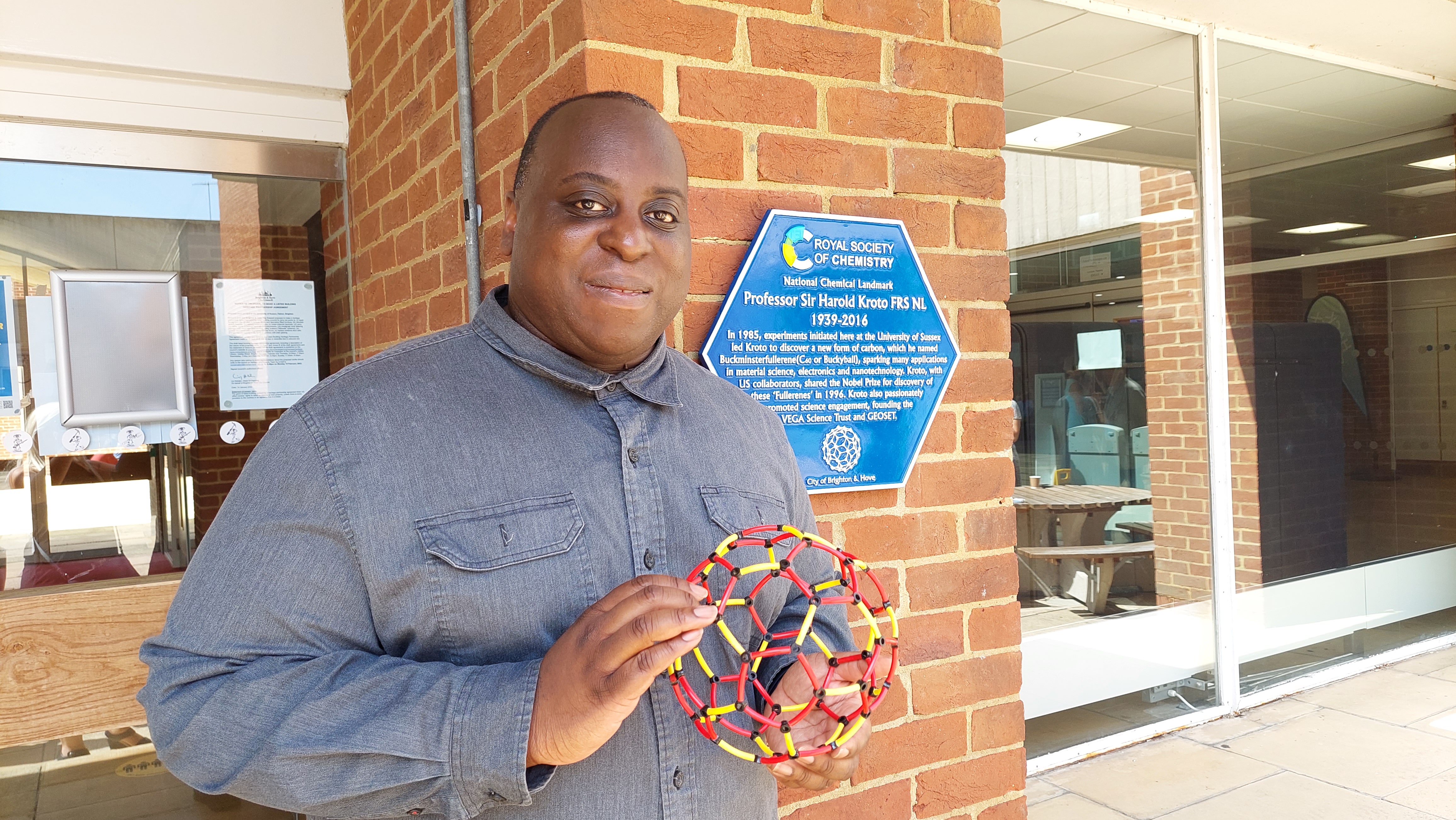 Steve Acquah co-hosts a buckyball workshop for students as part of the celebrations for the unveiling of the Royal Society of Chemistry Chemical Landmark Blue Plaque: UMass Amherst

Steve Acqua, associate research professor of chemistry, director of GEOSET and coordinator of the Digital Media Lab at the WEB Du Bois Library, co-hosted a workshop for around 200 schoolchildren with physicist, science communicator and television presenter Jonathan Hare at Sussex University in UK on June 17. The Buckyball workshop was among events celebrating the unveiling of the Royal Society of Chemistry Chemical Landmark Blue Plaque in honor of the late Nobel Prize-winning Professor Sir Harold W. Kroto at the University of Sussex, where he conducted his research . Steve and Jonathan completed their PhDs with Kroto at the University of Sussex and have run Buckyball workshops for students around the world.

Sir Harold Kroto received the Nobel Prize in Chemistry in 1996 along with Professor Robert F. Curl, Jr., Rice University, and Professor Richard E. Smalley, Rice University, for their discovery of fullerenes. Kroto worked on carbon laser vaporization to simulate the chemistry of stars and interstellar space. These experiments led to the discovery of C60 (Buckminsterfullerene, Buckyball), an allotrope of carbon.

“Harold Kroto absolutely loved the Buckyball workshops and has held several around the world. He was engaging with the students and loved seeing the spark of excitement in them when they finished building the Buckyball model,” Acquah said. “It was nice to reconnect with former members of the Kroto Research Group and talk about my current research in chemistry and my work at the Digital Media Lab at UMass Amherst. 3D printing, extended reality and audio/video productions are some of the ways we continue to promote science communication. 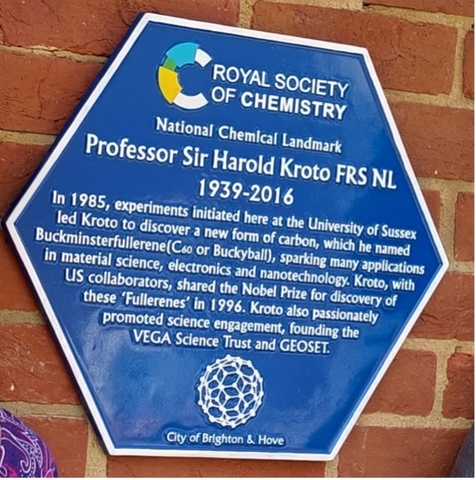 The blue plaque was unveiled by Lady Margaret Kroto and her son Stephen with guests including Professor Rachel Mills, Provost of the University of Sussex, Professor Tom Welton, President of the Royal Society of Chemistry, and Lizzie Deane, the mayor of Brighton and Hove. During the afternoon, former students and colleagues from the research group spoke about their work and their memories of Kroto with a screening of the tribute video produced by Steve Acquah after Kroto’s passing.

The Royal Society of Chemistry’s Chemical Landmarks Scheme helps raise awareness of where the individuals, teams and collaborative efforts of members of the chemistry community have contributed significantly to the impact of science.

Sir Harold Kroto was also known for his contributions to the popularization of science. He worked with BBC Education producer Patric Reams to establish the Vega Science Trust in 1994 to communicate science to the public through television. In 2006, he worked with Steve Acquah and Florida State University lecturer Colin Byfleet to create the GEOSET (Global Educational Outreach for Science Engineering and Technology) initiative, which took advantage of the Internet to provide a free resource educational videos.

In April, Grace Rogers was announced as the recipient of the 2022 Sir Harold W. Kroto and Steve Acquah GEOSET Award at UMass Amherst. Steve Acquah created the prize to continue the late Nobel Laureate’s legacy of research and outreach. It is awarded annually to a chemistry major who has demonstrated excellence in science communication through digital media.

To learn more about Acquah’s work with Chemistry and the Digital Media Lab, visit: people.umass.edu/acquah.