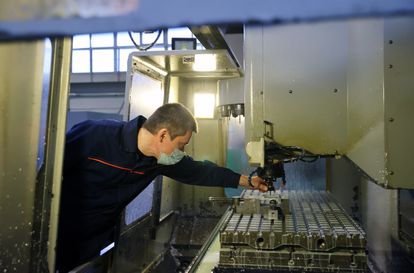 Driven by sanctions, the Kremlin launched in 2014 an ambitious economic plan to replace imports with domestic products. To the punishment of the European Union and the United States against the people and companies that participated in the annexation of Crimea in 2014 and the Donbass War, the Kremlin responded with a general veto on the purchase of food from the West. In the following years, and under increasing accusations of repression and interference in foreign elections, the sanctions list grew as Moscow redoubled its commitment, with varying degrees of success, to ” made in Russia â€.

Orders to replace imports with Russian products cover every conceivable sector. The Ministry of Industry has created a portal in which all substitution plans appear, from heavy industry to drugs and retail. For example, imports of children’s clothing were to be reduced from 85% of the total in 2016 to 65% in 2021; and automotive brake discs from 60% to 20%, respectively.

In some cases, notable progress has been made. Oil and gas companies, strongly affected by the sanctions, have reduced their imports of equipment from 60% to 43% between 2015 and 2020, according to the Ministry of Industry. This sector has been one of the targets of Washington’s punitive measures “to exert long-term economic pressure on the country,” as the US Congress acknowledged in a January 2020 report.

In other cases, nothing has changed in the market. According to a study by the Higher School of Economics, at the end of 2020, retail imports exceeded 75% of the total, with clothing and toys exceeding 90%.

“The substitution of certain imports is not, in itself, protectionism. In the 1970s, Japan and South Korea bought licenses and resources from foreigners to start producing on their own, and they were successful, â€says AleksÃ©i Portanski, professor at the Graduate School of Economics and former head of the Office for Russia’s World Accession. Trade Organization (WTO), to which Moscow joined in 2012. “However, this must be strictly planned: what specific sectors do we want to change and in what time frame”, underlines Portanski.

Seven years after the launch of this plan, Russian companies still face enormous problems in developing national models. “The main obstacle was, and still is, the lack of any quality Russian alternatives,” said Sergei Tsujlo, head of the business surveys department at the Gaidar Institute for Economic Policy. According to agency surveys, 80% of businesses across the country encountered this obstacle last September, the highest percentage since the survey began in January 2015.

Join MRT to follow all the news and read without limits.

“This factor is closely associated with the extension of restrictions imposed both by our ‘Western partners’ and by the Russian authorities,” Tsujlo explains. “With global logistical problems and as equipment wear and tear increases, Russian manufacturers cannot find what they need in the domestic market,” he adds. The second problem, according to the survey, is “the low quality of Russian products” manifested by more than half of the companies, compared to 25% who said the same thing in 2016.

One of the problems to encourage national production is that its development requires significant investments in time and money, especially if we want to be competitive with exports, because the domestic market of the sector is not big enough to offset the expense. And to this is added the cost of importing production materials: the Russian currency has devalued from 45 rubles per euro in January 2014 to 85 rubles per euro today.

â€œImport substitution has not borne fruit. They say it’s successful, but it’s not true, they manipulate the numbers, â€asserts Portanksi. â€œRussian foods have increased their market share, yes, but let’s look at it from the consumer’s point of view, that’s what we’re interested in. Russian products have appeared, but they are more expensive and the quality is not very good, why? Before the supermarkets had more supply, now our producers are monopolies â€, explains the expert.

Portanski refers to a 2019 Russian School of Economics study that analyzed how substitution works in the food industry during its first five years. With the exception of the poultry, pork and tomato categories, where real prices have fallen, the rest have become more expensive for the consumer. According to his calculations, Russian citizens paid an additional cost of 5.1 billion euros per year compared to prices in 2013. And this before the coronavirus. With the pandemic and the global disruption of supplies, the situation is even worse, because according to Rosstat (the Russian statistical agency), last year alone, food was 10.6% more expensive.

“The European Union is our main trading partner, and we are interested in continuing this collaboration, with your investments we receive the know how (the practical knowledge) that we need, â€emphasizes Portanski.

In the midst of a dispute over sanctions, Brussels accuses the Kremlin of favoring Russian companies over European companies in its calls for tenders and therefore announced in November that it would appeal to the WTO, whose basic principle is that its members do not discriminate on the basis of origin. The European Commission stresses that the economic impact for its companies “is very important”, since Russian tenders move billions of euros every year.

Brussels specifically denounces three Kremlin regulations. First, Russian state-owned companies assess the price offered by domestic companies as having a deduction of up to 30%. Second, Russian companies must apply for a permit when importing certain engineering products. And thirdly, there are quotas that guarantee Russian origin in tenders for many items, such as vehicles, medical equipment and technological products.

The spokeswoman for the Russian Foreign Ministry commented on the requests from Brussels via her Telegram channel. â€œIt’s stupid because import substitution was a response to European Union sanctions against Russia. Brussels has long said that our country had been “severely punished”. What is “hard” is “sadomasochism”, said MarÃ­a Zajarova.

One indication that the plan is not progressing as planned is that on December 24, the 2014 decree on quotas for public procurement of Russian products was amended. Of the 100 items listed according to the Russian classification, 41 were exempted because there are still not enough manufacturers. Among them are medical lamps, laptops, smart cards, integrated circuits and other electronic components.

By law, programs in key public sector IT systems are to be replaced as of January 1, while the rest will need to be replaced by Software Russian at the end of its useful life. However, corporate resistance has led Russian President Vladimir Putin to support the Digital Industry Minister’s proposal to hold executives who fail to meet this goal legally accountable. The department headed by Maksut ShadÃ¡yev even vetoed the oil company Transneft over a purchase of Microsoft for seven million euros, but finally gave in to reality: on December 29, it authorized the nuclear agency Rosatom to acquire company business management software. German SAP for nine million.

And in health, the same. In 2015, a five-year program was launched for 40% of medical teams to be national, but little progress was made, especially after the outbreak of the pandemic, and at the end of 2020 its quota was around 29%, according to the Chamber of accounts. There are few incentives: long delays in registering products and the depreciation of the ruble, which makes it even more expensive to buy materials from abroad, especially from China.

In January 2014, just before the sanctions, economist VÃ­ktor IvÃ¡nter (deceased in 2019) pleaded in an article published in the Official Journal RossÃ­skaya Gazeta to invest in domestic industry and also to end â€œcritical dependenceâ€ on food. “After 20 years of reform, we have achieved something that we do not want to give up: consumer choice, but it still depends on imports,” said Ivan. Eight years later, the choice is more limited and more expensive in the basket.

Edge Computing Success, IDC Says Depends On Edge Symbiosis And A Relationship Between Core And Workload