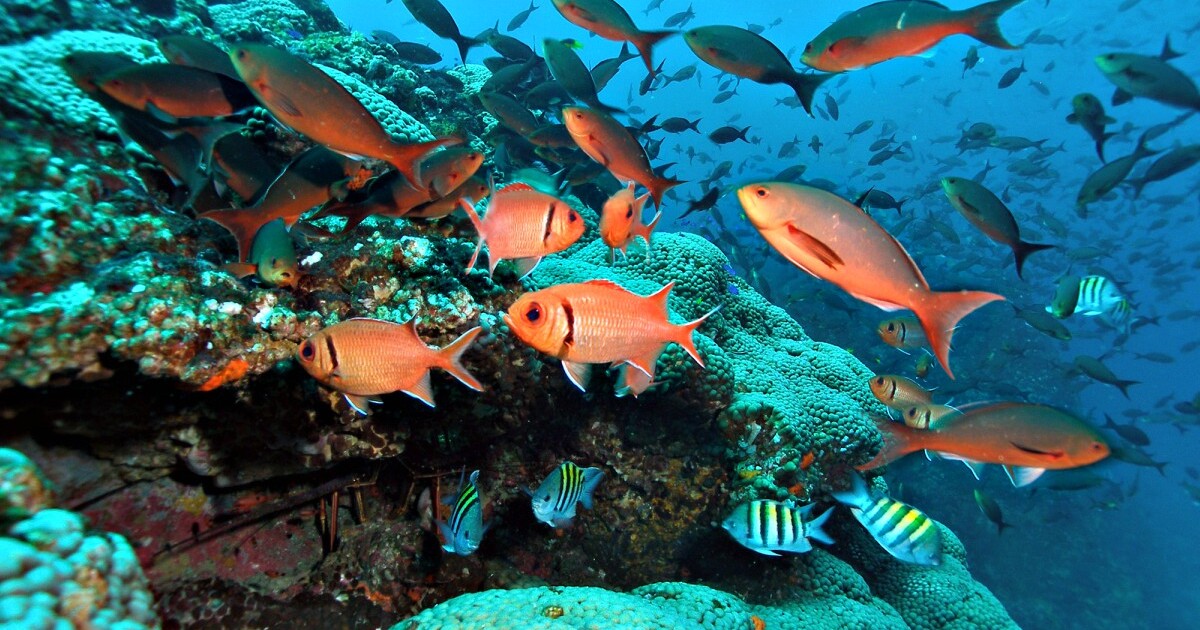 At the Moody Gardens Aquarium in Galveston, about 100 different corals sit in tanks of water in an enclosed room. Some are brown with markings that make them look like brains. Others have bright green coloring between their grooves. All were rescued from Florida after a deadly coral disease, known as stony coral tissue loss disease, began infecting the reefs there.

“There isn’t exactly a book on how to care for a coral, and many of these species have never been cared for in captivity before this program,” said Brooke Carlson, senior biologist at Moody Gardens.

Moody Gardens is one of approximately 20 zoos and aquariums across the country that collected rescue corals from Florida in 2019, with the goal of breeding them in captivity and eventually breeding them to restore damaged reefs.

“The plan was to remove as many healthy corals as possible from the population and put them in captivity so they would be safe from disease,” Carlson said.

First detected in Florida in 2014, stony coral tissue loss disease is characterized by its rapid spread and high mortality rate. Once infected, corals usually die within weeks to months. Wildlife officials are racing to protect corals and prevent the disease from spreading further.

Since its discovery in Florida, stony coral tissue loss disease has spread to more than 20 countries and territories in the Caribbean. Now divers have noticed potential signs of the disease at the Flower Garden Banks National Marine Sanctuary, a protected area about 100 miles offshore from Galveston.

“They were seeing lesions on some corals. It’s like a white line where tissue has been lost,” said Michelle Johnston, an ecologist researcher at Flower Garden Banks.

Johnston said they prepared a response plan after seeing what happened in Florida.

“Within three days of those sightings, we were responding,” she said. “We wasted no time.”

The response plan included taking samples of healthy and diseased corals for analysis and applying antibiotic treatment – ​​a mixture of amoxicillin and mastic – to the lesions of some of the infected corals.

Johnston said the disease doesn’t appear to be progressing as quickly as in Florida, which could be because the coral at Flower Gardens is healthier and more resilient. Or it could mean it’s a different, less deadly disease.

The problem is that researchers still don’t know exactly what’s causing the loss of stony coral tissue — they don’t know if it’s bacteria, a virus, or a combination of the two.

“For coral disease research, we’re still kind of in the dark ages,” said Andy Bruckner, research coordinator at the Florida Keys National Marine Sanctuary. “We’re kind of like where we were with human medicine in the late 1800s. We’re just learning.”

Bruckner said that globally, corals are already under a lot of stress due to factors such as warming and acidification of the oceans due to climate change and poor water quality due to pollution. . This stress makes them more susceptible to disease.

“One of the reasons why this disease has become so severe is that the corals are then somehow compromised by environmental stressors,” he said.

Bruckner is one of the authors of a five-year action plan recently launched by the National Oceanic and Atmospheric Administration (NOAA) to respond to stony coral tissue loss disease.

During a call announcing the plan, federal researchers said they see the disease as a potential global threat and want to prevent it from spreading to Indo-Pacific reefs. They hope to focus on what causes it, how it spreads and how to diagnose it.

Bruckner said ideally they want to create a simple test, like the one doctors use for strep throat, to quickly diagnose outbreaks.

“We’re looking to develop these same kinds of tools for corals, so that we can go in and when we see an outbreak of disease, we can immediately say ‘Yes, it’s stony coral tissue disease’ or ‘ No, it is not,” he said.

Bruckner said being able to diagnose the disease will help them implement more effective treatment plans.

Continuing to protect and breed healthy corals in captivity is also part of the new action plan. Healthy coral from the Flower Garden Banks National Marine Sanctuary has already been sent to Moody Gardens, where it is in the care of Brooke Carlson.

“They’ve been doing really well in this month that we’ve had them,” Carlson said.

Flower Garden Banks corals are completely separate from Florida corals, as they come from different ecosystems, but Carlson said a lot of what they learned from caring for Florida coral can be applied, such as their food preferences. .

On a recent Wednesday, Carlson and his team started making Florida Coral Lunch at the lab, combining ingredients like zooplankton and oyster tissue in a pitcher.

Biologists use a turkey baster to place the liquid meal on each individual coral.

“Beyond just growing their skeletons, they grow thicker tissue — so what I like to call softer corals,” Carlson said.

Soon they will be ready to be sent to another facility for breeding.

While the coral may not have the initial charisma of other sea animals, Carlson said that after spending so much time with them, she came to learn all of the subtle differences between each individual coral.

“Anyone can identify with a mammal, but it’s harder to associate the same emotion with a coral, when it looks like a slimy rock,” she said. “But to be able to see them react to food, to see them thrive in that environment has been extremely rewarding.”

Carlson said protecting corals is essential because they serve as the foundation of the ecosystem, providing habitat and food for so many species.

“Without the corals, the ecosystem could collapse,” she said. “It’s very important that these corals are doing well and hopefully returning to the wild. That way we can help rebuild this really crucial ecosystem.”