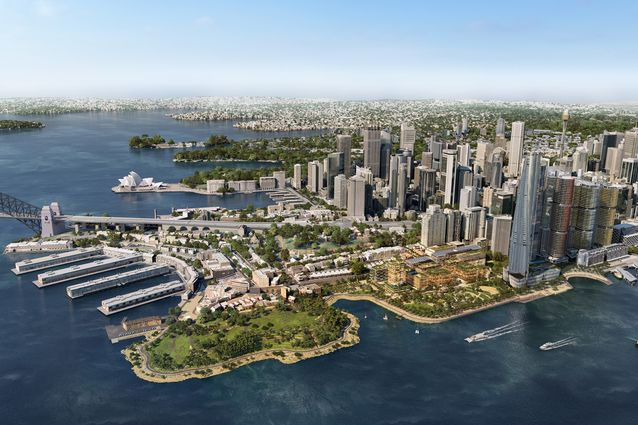 The redevelopment of the 22-hectare neighborhood of Barangaroo in Sydney Harbor has long been a masterclass in poor governance of urban development and lack of due process. It aimed to transform the old docks into a world-class example of architectural design and public space. Instead, Sydney got a global example of unsolicited town planning and a casino.

Unsolicited urban planning is a city-shaping project initiated by developers, not the government. It clearly favors powerful actors in development and finance. Instead of being subject to appropriate public planning processes, outcomes are often predetermined.

In the case of Barangaroo, secret monopolies on the site have been legitimized. A culture of planning as negotiation has been normalized.

A coalition of key figures from state government and the real estate and development lobbies have targeted not only this prime port-side site for development, but the planning system itself.

The latest rage at the site involves a proposed change to approved plans for Central Barangaroo. The changes would significantly increase floor space, including a new 20-story tower above a subway station, and shrink a public park. This is the last slice of buildings that will be between the highly developed southern end and the Barangaroo Reserve at the northern end.

This is another example of how planning works here. It is the Planning Minister and not the Independent Planning Commission who will make the decision.

The latest chapter in a decade-long saga

The story begins with the winning entry in the competition run by Hill Thalis for the Barangaroo Master Plan. It was effectively discontinued in 2009-2010 – overhauled out of existence.

Since then, the public justification of the project has been based on two main arguments:

The second argument was a standard guff dependent on “starchitects” and world-benchmark rhetoric.

The first was more convincing. Often repeated in public by former prime minister Paul Keating, the argument was that the promontory was a vital aspect of the city’s most important heritage, the harbor landscape. It was much more important to rebuild it, Keating suggested, than to protect the shape and some of the container port’s residual industrial heritage.

Aside from Philip Thalis’ judgment that this is a “kitsch and historicist fantasy”, where is the current proposal (amendment 9) for Central Barangaroo?

This implies a noticeable development impact on the harbor landscape seen from the harbor itself and from one of Sydney’s most important public open spaces, Observatory Hill.

The expanded development and new tower would be in an area still considered low-rise. The reason was to protect the views and the historic landscape.

Part of a larger story of failure

This latest chapter of Barangaroo is part of a long history of failed urban governance.

Under the New South Wales Liberal government over the past decade, a series of ‘reforms’ have undermined the integrity and credibility of the planning system. Our research followed the longer story of how these changes ensured unsolicited urbanism, as shown below.

We have seen small development loopholes opening up in building heights and floor space ratios, and the much more significant increase in the unsolicited proposal process at Barangaroo.

NSW is not alone here. In Victoria, the West Gate Tunnel project in Melbourne is another controversial case of unsolicited town planning.

The rise of planning as a transaction involves geographic sleight of hand. Rather than working on a broad strategic plan for an entire city or neighborhood, it reduces public debate to a low-key discussion of a specific planning or development process, or a new section of the site.

The objective of this incremental approach is twofold:

What is lost is responsibility for how well a project meets the broader goals of the city’s strategic planning. A “let it go” mentality pervades the development sector and sections of government as well.

Any long-term plan, plot of land, public infrastructure, or zoning process is seemingly up for grabs, likely to be sold, changed, or scaled. The planning system is increasingly fragmented and disjointed. Merit and the public good have given way to developer business cases.

Anyone who opposes development approval is accused of self-serving NIMBYism, regardless of the validity of their concerns.

Will the government heed the concerns of Sydneysiders?

Occupancy rates in Sydney’s central business district have stagnated. The Committee for Sydney advocates for revitalization based on diversity and inclusiveness. Barangaroo’s latest blueprints will not provide this.

Instead, real estate interests want more exclusive, higher-density high-rise residential development on land that could be used differently, if social, cultural and environmental considerations were prioritized.

In 2016, the NSW Audit Office called for greater transparency and public reporting of unsolicited proposals. He warned that these “pose a greater value for money risk than procurement made through open, competitive and transparent processes”.

The latest controversy comes amid scandals engulfing state government, following a federal election won and lost on issues of public integrity and evidence-based policymaking, from climate to management of the pandemic.

The public has lost faith in politicians to represent the best interests of citizens. They are wary of corruption and hate “peer deals”. While people may not understand the technicalities of “significant state” planning proposals, alterations and developments, they feel the cards are stacked against the public interest.

The battle lines have been drawn on this fateful last piece of Barangaroo. The government’s decision will reveal where its loyalties lie and whether planning integrity can be salvaged before voters cast their ballots in the 2023 state election.

This article is republished from The Conversation under a Creative Commons license. Read the original article.

These are the 5 largest stocks in Rakesh Jhunjhunwala’s portfolio, holding values ​​ranging from ₹1,000 cr to ₹11,000 cr

5 star doctors only! 3 out of 4 people use online reviews to find new doctors