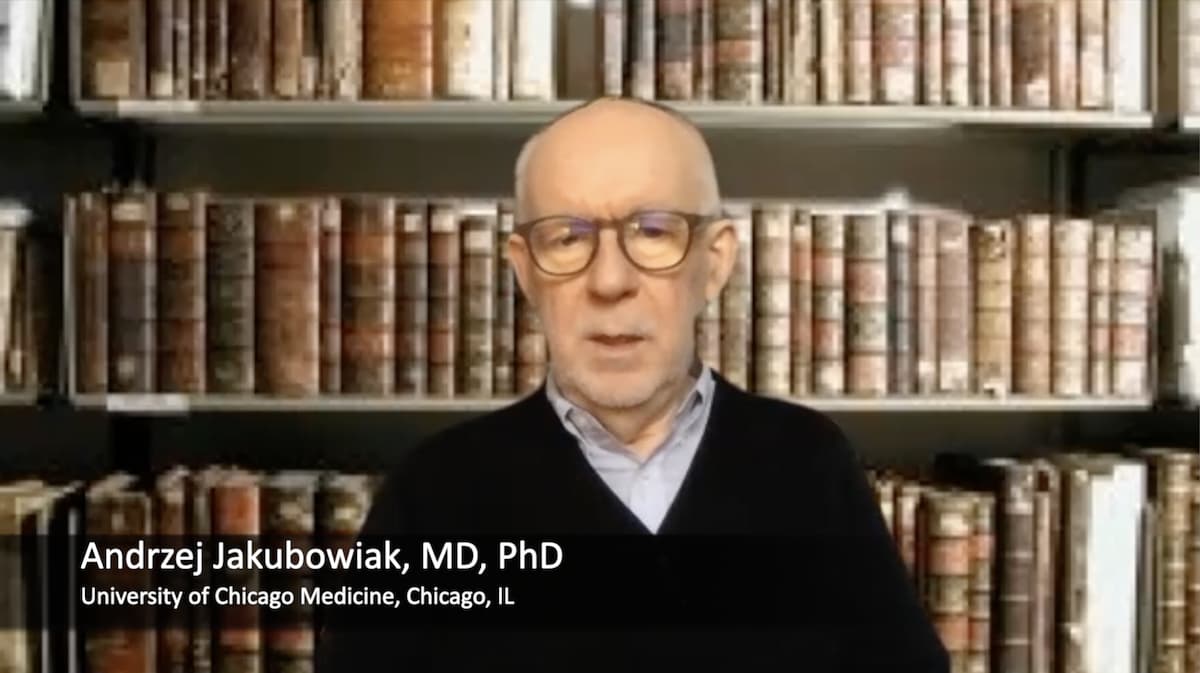 At American Society of Hematology 63rd Annual Meeting and Exhibition, Andrzej Jakubowiak, MD, PhD, director of the myeloma program at the University of Medicine of Chicago, spoke about the research he was most eager to see the results of. In an interview with CancerNetworkÂ®, he detailed the results of the GRIFFIN trial (NCT02874742) daratumumab (Darzalex) added to lenalidomide (Revlimid), bortezomib (Velcade) and dexamethasone (D-RVd) in combination with autologous stem cell transplant (ASCT), followed by daratumumab plus maintenance lenalidomide vs RVd and lenalidomide maintenance alone for patients with newly diagnosed multiple myeloma.1

That’s why I wrote to you [presentation] what probably had the biggest impact, not only on me, but on many of us, were the updated results of the GRIFFIN trial. This is a trial in which newly diagnosed patients are treated with [D-RVd or] RVd, which has been our most common choice of initial treatment in the United States until recently, or the standard of care. In this trial which was updated at this meeting, adding the daratumumab antibody to RVd in the treatment plan, which includes transplant after 4 cycles and additional maintenance with daratumumab and lenalidomide, generates very good results. This Phase 3 Randomized Trial Generated Significantly Superior Depth of Response, Complete Responses, and MRD [minimal residual disease] negativity, but we now observe a very clear separation of the Kaplan-Meier curves of the superior progression-free survival on daratumumab compared to the RVd arm without daratumumab, which is [producing a] risk ratio less than 0.5. For most of the larger studies, this is statistically significant; [however, this trial] has not yet reached such statistical significance at this stage. This is expected to be provided at the next meeting and further evaluated in another similar, larger study, the PERSEUS trial. [NCT03710603], which in a larger patient group, patients will be able to establish this treatment strategy as one of the best choices and possibly the standard of care in the United States and around the world.

I would add that similarly, but this was not a randomized trial, there has been a very impressive update from the MASTER trial [NCT03224507], 2 which used a different backbone from KRd [carfilzomib (Kyprolis), lenalidomide, and dexamethasone] with daratumumab as well. Likewise, as in GRIFFIN, it was followed by transplant, followed by KRd for the duration of treatment, which was in accordance with the study design, [with the achievement of] MRD negativity leading to discontinuation of treatment. In this study â€” which is 1-armed, so it’s hard to see how this will affect our practice â€” the results were probably the best we’ve seen in myeloma, with up to 80% of [patients achieving] MRD negativity and a very promising [median] PFS at this point. Quadruplets impress me with RVd and KRd with the most advanced daratumumab with more to come. When we incorporate them into extended treatment and transplantation, we get responses and a duration of responses that we’ve never seen before.

How student researchers can change the world – newsroom