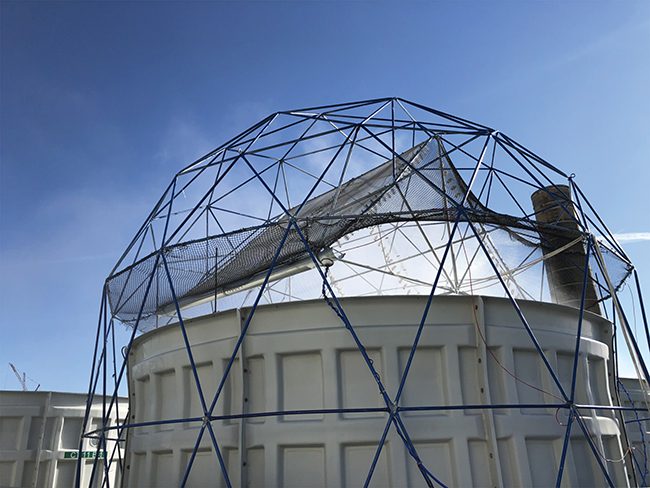 A long-standing concern in the power industry is the amount of water lost from cooling towers. Water is mainly lost through evaporation, which involves the dissipation of vapor into the ambient air during the heat rejection process. But it also happens during purging, when water must be removed from the tower and replaced to prevent fouling and scale formation. Some water is also lost due to drift, which occurs when tiny droplets are carried along with the outgoing air or vapor stream, although drift losses are usually minimal, amounting to less than 1% consumption.

Water losses can be significant. The U.S. Environmental Protection Agency (EPA) suggests that, regardless of cooling tower operating efficiency, approximately 1.8 gallons of water evaporates for every ton-hour of cooling. “Traditional wet-cooled power plants lose 60% to 90% of their incoming water via evaporation or cooling tower drift,” noted Dan Sampson, principal technical consultant at HDR.

Besides being costly, these losses have other side effects. Since water evaporation requires continuous make-up from a water source, current and future water shortage issues can directly affect the reliability and viability of the power plant. In 2017, two Massachusetts Institute of Technology (MIT) doctoral students, Maher Damak and Karim Khalil, and MIT professor of mechanical engineering, Kripa Varanasi, set out to tackle this pressing problem by focusing on power plant plumes. electrical.

The Quest for Plume Reduction

As the vapor leaves a cooling tower, it can, under certain ambient conditions (usually when the surrounding air is cold or humid), condense and form a plume of fog, the researchers observed. Plumes have long posed another concern for the energy industry, the researchers noted. They can be annoying and even dangerous.

“Regulatory requirements for safety (plume drift can reduce visibility on roads and airports) and aesthetics require some cooling towers to be equipped with plume suppression systems, which typically heat the steam outgoing vapor and decrease its humidity, either by heat exchangers or by blowing hot, dry air and mixing it with the outgoing vapor, thus preventing the formation of droplets of fog at the exit of the tower”, they said.

Although these abatement systems can remove the appearance of a plume, a power plant using them can still consume the same amount of water and suffer reduced overall net energy efficiency, due to additional redirected heat requirements. to the outlets of the cooling tower. And while some devices have been designed to collect vapor exiting cooling towers for reuse in the cycle, most methods rely on liquid or solid sorption, requiring significant energy or expensive equipment.

As part of a project supported by the MIT Varanasi Research Group, researchers developed the Water Panel (Figure 1). When the fog-rich air is zapped with an ion beam, the water droplets in the fog become electrically charged. These droplets can then be attracted to a wire mesh (like a window screen), captured and drained into a collection bin. The power plant can then reuse this “reclaimed” water or send it to a city’s water supply system.

The system is essentially a distillation process that could allow a 600 MW power plant to capture up to 150 million gallons of water per year, which is about 20-30% of the water lost from the towers. cooling, according to Infinite Cooling. Research and development results suggest that water captured by the system typically measures less than 50 microsiemens per centimeter, a measure of electrical conductivity that measures water contamination. This compares to the 3,000 microsiemens per centimeter that water used in power plant cooling systems typically measures.

The race to rise

The concept has become a central objective for Infinite cooling, a startup founded by Damak, Khalil and Varanasi in 2017. Damak is the CEO of the fledgling company, Khalil as Chief Technology Officer and Varanasi as President. In 2017, researchers joined 20 other teams in MIT’s delta v cohort, a student business accelerator that provides mentorship and incubation for student entrepreneurs to launch their ventures. Development of the concept has since accelerated considerably, supported by interest from industry and academia.

Infinite Cooling went on to win the MIT $100K Entrepreneurship Challenge grand prize in 2018. It used this prize to raise funding from the MIT Office of Sustainability to set up test facilities in various configurations on one of the MIT cooling. Central Utility Plant powered by natural gas.

When tests at the cogeneration plant showed that the system could remove the plume and produce high-purity water, Infinite Cooling was asked to carry out further tests in the research center of the Nuclear Reactor Laboratory of the MIT. The research reactor, which operates 24 hours a day, 7 days a week and produces higher temperature steam emissions, proposed a real-life test in a real operating reactor licensed by the Nuclear Regulatory Commission (Figure 2 ).

Crucially, this allowed Infinite Cooling to test the technology on a large scale and validate water quality and system performance. “After installing the system above one of the plant’s four cooling towers, tests showed that the collected water was more than 100 times cleaner than the feed water entering the plant. cooling system,” MIT said. “It also proved that the installation – which, unlike the previous version, had its mesh screens mounted vertically, parallel to the steam flow – had no effect on the operation of the plant.”

An industrial demonstration on the horizon

More recognition and competitive awards soon followed for Infinite Cooling. Awards include the MassChallenge Awards, the Department of Energy (DOE) National Cleantech Competition and the Rice Business Plan Competition. As recently as April 2022, it won the gold award in the Edison Best New Product 2022 competition. But Infinite Cooling also secured several notable federal grants to help accelerate its development, including a $100,000 $ for Small Business Innovation Research (SBIR) from the EPA in 2019. This award was recently increased to nearly $1 million as part of an SBIR. Phase II grant.

Bolstered separately by a $1.5 million award in the DOE’s Water Management Cross-Peer Review, Infinite Cooling is currently exploring cooling tower plume formation and collection at mechanical draft (induced). Testing is underway partly in a high-fidelity controlled environment and partly on a full-scale industrial cooling tower. This project, which is supported by the National Energy Technology Laboratory (NETL), is scheduled for completion in September 2022. It involves the use of a computational fluid dynamics (CFD) model to understand the plume characteristics of power plants and to inform test electrodes and collectors, who will compose modular panels that NETL will install on its cooling tower. Parts of the design will then be prototyped and tested on the lab’s cooling tower to assess collection efficiency. “The result will be a ready-to-deploy design for a high-flow water collector for cooling tower plumes on an industrial cooling tower,” NETL said.

Once the design is complete, fabrication of the modular collection panels and structure will begin. Next, in another recently funded $1.1 million DOE project that will end in July 2024, the project team will build a full-scale prototype on the cooling tower at the Fox Energy Center in the Wisconsin Public Service, a 620 MW two-unit nature park. gas-fired combined-cycle power plant in Wrightstown, Wisconsin. According to NETL, this project will inform all potential next steps in technology maturation, paving the way for commercialization.

“If successful, the developed technology could result in significant water savings and improved water quality with minimal energy cost,” the lab said. “Existing towers can be easily retrofitted with the technology, resulting in a significant reduction in water consumption in cooling towers as well as a reduction in the use of chemicals for water treatment in cooling towers. coal-fired power plants.”

Daily news from online research no. 33505