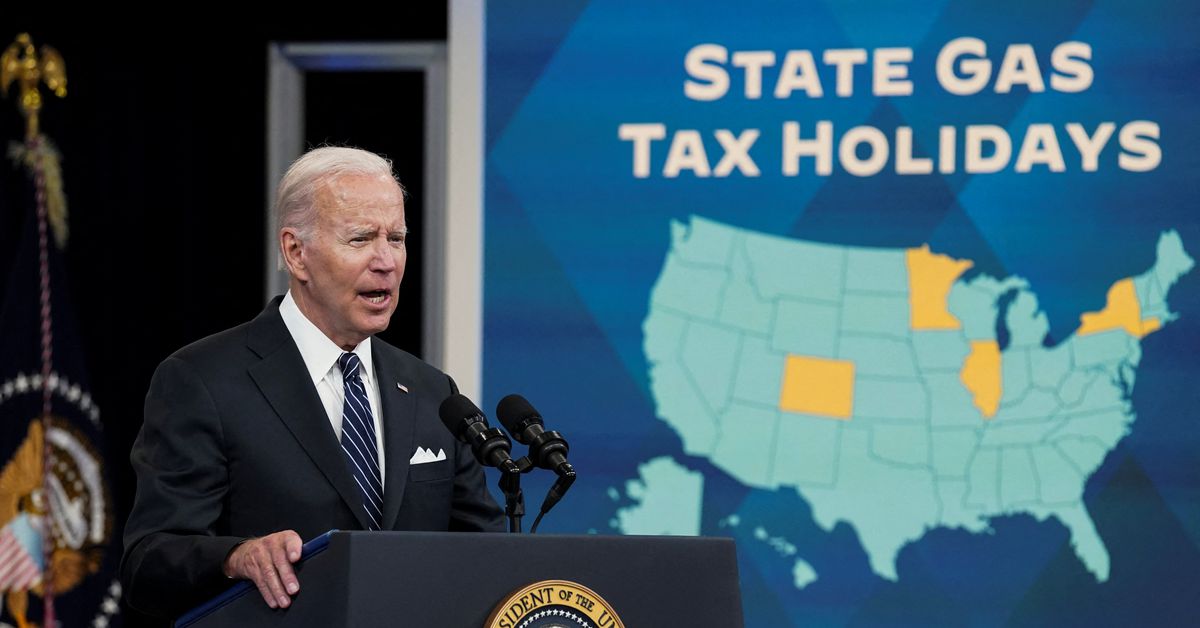 US President Joe Biden calls for a federal gasoline tax suspension as he addresses gasoline prices during remarks in the South Court auditorium of the Eisenhower Executive Office Building at the White House in Washington, United States, June 22, 2022. REUTERS/Kevin Lamarque

Here are the main issues surrounding a fuel tax exemption:

WHAT ARE THE FEDERAL FUEL TAXES?

But it is still an important source of public revenue. Congress first mandated it in 1932 during the Great Depression as a way to help revitalize the economy. It mainly pays for the construction of highways and bridges, works that keep businesses running by avoiding transportation delays. Part of the tax also goes to projects like public transit.

According to the White House, waiving the federal fuel tax through September, as Biden proposes, would cost the Highway Trust Fund $10 billion, but could be funded from other areas of the budget.

HOW MUCH DO STATES TAX ON FUEL?

As gasoline prices rose this year after Russia invaded Ukraine and the world emerged from the worst of the COVID-19 pandemic, some states, including Maryland, Georgia and Connecticut, have already reduced fuel taxes.

A review this month by researchers at Wharton, the University of Pennsylvania’s business school, found that 72% of the tax cut was passed on to consumers in Maryland, but only 58% 65% of savings were passed on to consumers in Georgia. The researchers said suppliers may capture some of the economic benefits if prices at the pump do not fall by the full amount of the suspended tax.

If a fuel tax exemption were passed by Congress, it might not help consumers much. The temporary reduction in fuel prices, for example, could simply stimulate demand by causing drivers to consider longer trips and avoid carpooling and public transport. This, in turn, could mean that prices return to where they were, or even higher.

“This is actually going to fuel more demand and is actually bullish for oil,” Amrita Sen, co-founder and director of research at Energy Aspects, a research consultancy, told CNBC on Wednesday.

WHAT ARE THE CHANCES OF BIDEN’S PLAN PASSING IN CONGRESS?

In February, six moderate Democrats in the Senate, some of whom were up for re-election in November, introduced a bill to suspend the gas tax. But the bill faced opposition from Republicans, including the party’s Senate leader Mitch McConnell, because it didn’t also suspend the tax on diesel used by many trucks.

However, even some of Biden’s fellow Democrats have been skeptical of the federal tax break. House Speaker Nancy Pelosi said in March that oil companies would simply raise fuel prices and reap a profit. Pelosi stopped committing to the plan on Wednesday. “We’ll see where the consensus is on the way forward for the president’s proposal in the House and Senate,” she said in a statement.

Senator Tom Carper, a Democrat from Biden’s Delaware state, tweeted Tuesday that “suspending the primary way we pay for infrastructure projects on our highways is a short-sighted and ineffective way to provide relief. “, adding that other options to reduce energy costs should be explored.