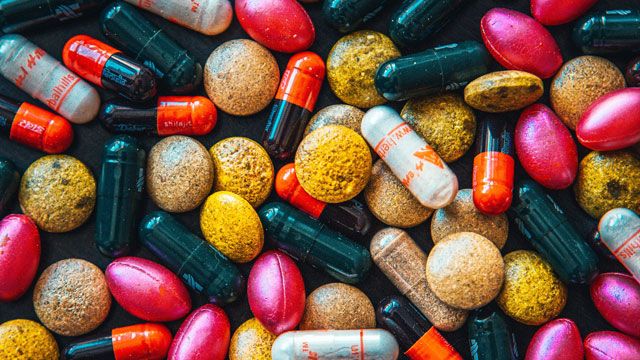 A drug combination targeting multiple mutant versions of the cancer ‘death star’ protein has shown promise in a small, early-stage clinical trial for some patients with advanced lung, ovarian and cervical cancer. thyroid.

The two-drug combination was effective against advanced cancers with a range of mutations in the KRAS gene – dubbed ‘the Death Star’ because its protein causes one in four cancers and has a largely impenetrable and drug-resistant surface.

The phase I trial tested the drugs VS-6766 and everolimus in 30 patients with a range of KRAS mutations – including 11 with very advanced non-small cell lung cancer.

Half of the group of lung cancer patients have not yet seen their cancer progress at six months – about twice as long as the expected benefit of chemotherapy at such an advanced stage of the disease.

The research was led by a team from the Institute of Cancer Research in London and the Royal Marsden NHS Foundation Trust and is being presented today (Monday) at the 2022 Annual Meeting of the American Society of Clinical Oncology (ASCO) .

Previous trials that aimed to medicate multiple variants of KRAS in the same way have not been successful due to severe side effects in patients. The current trial uses an innovative dosing regimen to limit toxicity. Patients received the two drugs twice a week for three weeks, followed by a week off.

The patients in the trial had already received several prior cancer treatments, including advanced chemotherapy and immunotherapy. But their cancers stopped responding because they had adapted to the treatment and developed resistance to the drugs.

Yet the new drug combination shrank tumors by more than 30% in two of 11 lung cancer patients and controlled tumor growth in nine. It has also produced responses in patients with advanced ovarian and thyroid cancers – and the researchers plan to expand this cohort further.

Some 40% of lung cancers, 45% of bowel cancers and 90% of pancreatic cancers are caused by mutant versions of KRAS.

Until recently, KRAS mutations were extremely difficult to target. The first effective drug was approved in the United States in 2021, but it can only target one KRAS variant called G12C. Of patients with KRAS-induced lung cancer, only 40% have a G12C mutation, meaning the majority cannot benefit from currently available KRAS-targeting drugs.

Rather than drugging KRAS itself, VS-6766 and everolimus make KRAS less effective by simultaneously blocking the two pathways that KRAS relies on to stimulate growth. This means the drug combination can also target cancers that are driven by many other KRAS mutations, opening up treatment options for other patients for whom current treatments have stopped working.

Targeting KRAS-fueled cancer in two distinct ways aimed to delay the evolution of drug resistance and prevent cancer progression. Identifying unique treatment combinations capable of countering the ability of cancer to develop resistance to treatment is one of the main goals of scientists at the Institute for Cancer Research (ICR).

The ongoing trial is funded by Verastem Oncology.

The researchers hope to confirm the results in a larger group of patients. If successful, they will move the suit to further trials.

“Our preliminary study shows that an innovative drug combination can effectively target multiple mutant versions of KRAS – which is one of the most dangerous mutations in cancer and one of the most difficult to create treatments against. new treatment paradigm for targeting KRAS mutations in multiple tumor types, including low-grade serous ovarian and lung cancer.

“Many groups have given up trying to treat both pathways that KRAS relies on to stimulate growth simultaneously because the side effects were too severe for patients. We are delighted that by using an innovative dosing regimen, we have “succeeded in slowing cancer progression in several patients who had run out of treatment options. If we see similar results in more patients, we could see this combination move through larger clinical trials.”

Dr Anna Minchom, consultant medical oncologist at the Royal Marsden NHS Foundation Trust and head of the thoracic oncology drug development team at the Institute of Cancer Research, London, who is presenting the data at ASCO 2022, said:

“It’s great to see that this innovative drug combination is showing potential for treating patients with various cancers, who are left with no other treatment options. Patients with KRAS-mutated non-small cell lung cancer, except those with a subtype known as KRAS G12C, currently do not have targeted treatment options. This was a small early phase trial, but to see patients responding to this treatment and not experiencing serious side effects is really promising.

Sally Wells (pictured), 53, from Dartford, was diagnosed with stage 4 ovarian cancer in 2016 and joined the trial in 2019 at Royal Marsden Three years later, the treatment is still working and she has been able to spend time with her husband, children and grandchildren.

“Before I was diagnosed, I had virtually no symptoms. I was decorating one day and hit my stomach on a scale, which caused pain that didn’t go away. I was advised to go to A&E, and after scans, blood work, and a biopsy, I was diagnosed with stage 4 ovarian cancer, which had spread to my liver and intestine It was a complete shock.

“I had six rounds of chemotherapy, I lost my hair and with that I felt like I was losing myself too. Just before Christmas 2018, after running out of treatment options, I was said there was nothing else for me to do and I went home knowing that I was coming to the end of my life and then I heard the amazing news that I had been able to participate to this trial at the Royal Marsden. It was my only hope, and I would have done anything to prolong my life. It has been three years now and I am fine. This treatment has changed my life and allowed me to continue to lead a full life with my children and my grandchildren.

This article was republished from the following documents. Note: Material may have been edited for length and content. For more information, please contact the quoted source.