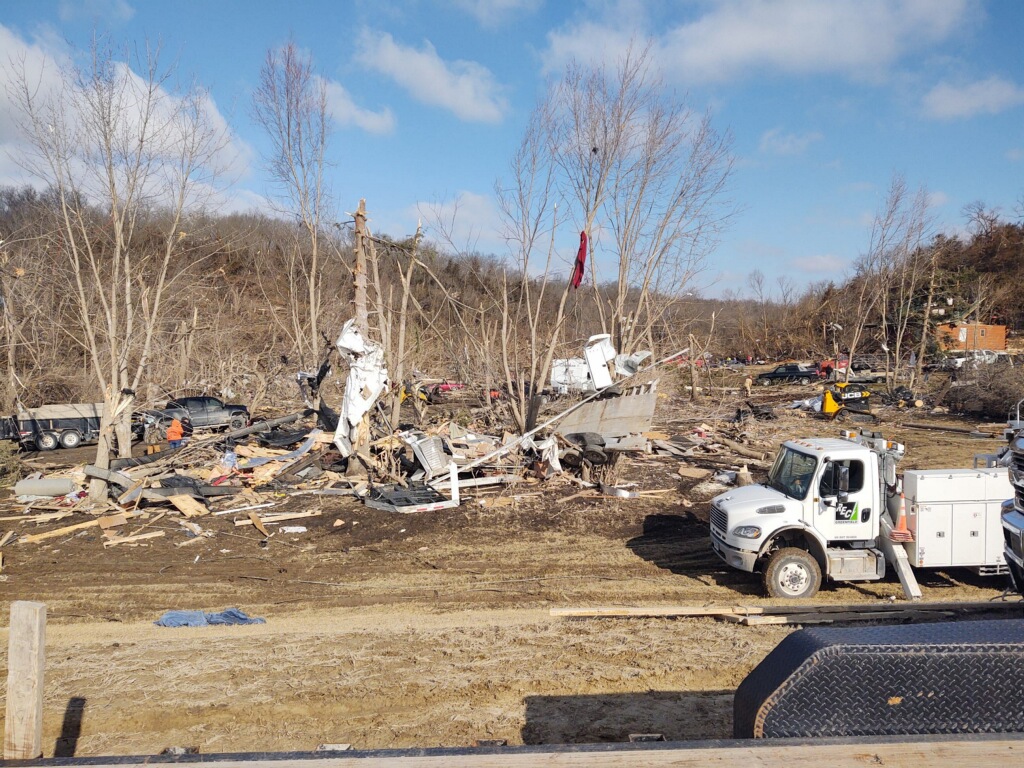 The weather bill passed the House on Wednesday with bipartisan support. The communications network known as the National Weather Service’s Chat provides information to the general public, broadcast stations, and emergency officials regarding severe weather.

“In March, south-central Iowa experienced the deadliest storm to hit our state in over a decade,” Rep. Mariannette Miller-Meeks said in an email response to Iowa Capital. dispatch. “As these disasters unfold, we must ensure that the National Weather Service is properly equipped to help communities across the United States prepare for the dangerous storms that are about to occur. This bill will give the National Weather Service the ability to update its systems to help keep our communities safe.

In March, there was a computer glitch in the National Weather Services’ warning system during a tornado in Winterset, Iowa. Representative Cindy Axne said this underscores the need for multiple modern communications systems in severe weather.

“This legislation has the potential to save lives and will bring us closer to preventing miscommunications and ensuring that Iowans have the information they need to protect themselves,” Axne said. “I have enjoyed working with Rep. (Randy) Feenstra and the rest of the Iowa delegation to support this common sense and important legislation.”

“When I was elected to Congress, I promised I would get things done for our families, our farmers, our small businesses and the thriving communities of Iowa,” Feenstra said. “My two bills passed by the House represent my commitment to finding solutions to the problems facing our state and our nation.”

Feenstra also introduced a bill to create new qualification requirements for chief scientists at the National Oceanic and Atmospheric Administration. Chief scientists will need to apply higher standards of scientific integrity to administration. The legislation would also require the President of the United States to accept recommendations from scientific organizations during the selection process for the chief scientist.

The three Republican representatives from Iowa voted against legislation to expand manufacturing of semiconductor chips in America.

The Semiconductor Production and Science Incentive Creation (CHIPS) Act has passed Congress and is now awaiting the President’s signature. The law allocates more than $52 billion to develop national facilities and equipment to produce the microchips used in many cars and electronic devices.

“While I support the original intent of this legislation, the final $80 billion package will drive up inflation, undermine our long-term competitiveness and could allow taxpayers’ money to boost China’s economy. communist,” Rep. Ashley Hinson said. “This is yet another example of the chaos and dysfunction in Washington that stands in the way of legitimate solutions to serious challenges.”

The Democrats were joined by 24 Republicans in the House. The bill will also support the development of mobile broadband and increase investment in public research. Democratic candidate and state senator Liz Mathis is running against Hinson in the November midterms. Mathis said this legislation will create well-paying jobs for American workers.

“Instead of voting to improve the supply chain and invest in manufacturing jobs here at home, Hinson voted to continue our reliance on China. American workers and Iowa deserve better,” Mathis said.

Address prices at the pump

The senses. Joni Ernst and Chuck Grassley have introduced legislation to allow the use of more ethanol in fuel, which they say will help lower gasoline prices.

The Next Generation Fuels Act would allow the sale of fuels with a higher octane rating, which is a standard measure of fuel’s resistance to auto-ignition during fuel compression, according to the US Energy Information Administration.

“As the people of Iowa are crushed by exorbitant prices at the pumps and America continues to depend on foreign countries for its energy, we should look to our own abundant domestic production right here in the United States, including clean, local biofuel,” says Ernest. “It’s obvious.”

With crime increasing in the United States during the pandemic, Grassley introduced legislation to clarify the ambiguity around Congress’s intent regarding certain dangerous crimes laws.

Two dozen Republicans joined Grassley on Wednesday in supporting legislation that would ensure bank robberies and acts of conspiracy are punishable under current law. Victims of violent crimes who survive their injuries would no longer have a 366-day limit to file murder charges against the perpetrator.

The Tackling Violent and Dangerous Crime Act also increases penalties for carjacking and eliminates the dual intent requirement for the offense. The marketing of candy-flavored drugs to minors would be banned and penalties for violent kidnappings would increase.

“Some of the hardest hit communities are cities with progressive pro-criminal prosecutors,” Grassley said. “I want my fellow Democrats to know that we are willing to work with them on this bill. I’m sorry to say that none of them responded to our request for co-sponsorship. I hope they change their minds because we need to reverse this persistent tide of violent crime and bring relief to the American people.

Over $1 million was raised and will be donated to local charities. Feenstra and Ernst were the only Iowa players in the game

Jacob Fischler contributed to this report

$160.68 Million Gap in Sawmill Machinery Market Due to Increase in Construction Activities