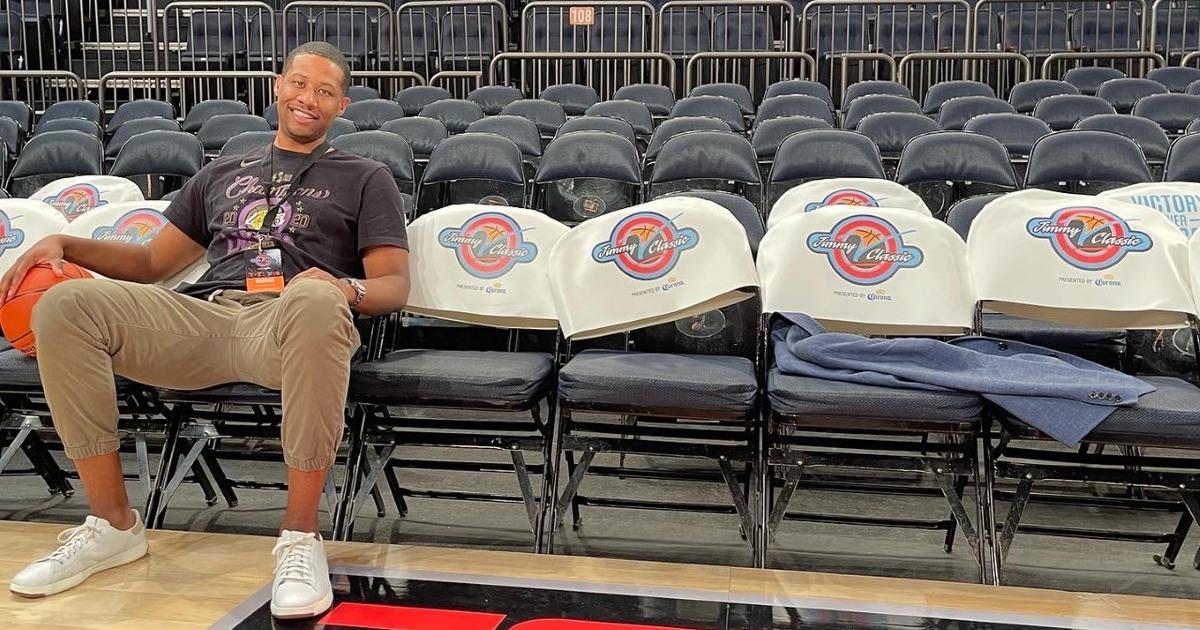 LEXINGTON, Kentucky (June 16, 2022) — The sports industry is a multi-billion dollar global machine, and an alumnus of the University of Kentucky’s College of Communication and Information is trying to channel that wealth into the fight against cancer.

Jeremy Jones, a communications graduate in 2011, contributes to the fight against cancer through the V Foundation for Cancer Research. The nonprofit was created in 1993 by ESPN and the late basketball coach Jim Valvano, known as Jimmy V, to award cancer research grants nationwide. Combining his passion for sports, his love of marketing and his affinity for philanthropy, Jones is working right in his sweet spot.

“I love what I do because it makes a difference,” Jones said. “I wake up every day and I’m still working in sports, but I’m also creating change, even if it’s a small piece. I’m part of a team where our mission is Victory Over Cancer®, and that’s is why we wake up every day, and this is our motto.

When Jones, from Georgia, came to the UK to play football, he didn’t know what his future looked like. At the time, the university did not have a sports management course. Instead, Jones chose communication to improve her interpersonal skills while taking as many sports-related classes as possible. Along with a virtual internship at a sports agency and a marketing internship at Learfield IMG College, former exclusive media rights holder of Rupp Arena, he said every move he makes is calculated for a career in the sport.

Marketing served as Jones’ entry point into the world of sports employment. After a few years honing his real estate marketing skills, he put his communication skills to good use to land a spot as an account executive with the Brooklyn Nets. While many sports fanatics might have found the dream job for a professional basketball team, Jones knew after a year that his focus lay elsewhere.

Enter The V Foundation and an opening for a marketing manager for the Victory Ride cycling event. It was a short-lived role where Jones handled social media, marketing and promotion for the event, but he used his nine months on the job as a catalyst for his career with the company.

It wasn’t long before he was promoted to Engagement Manager. During his three years in this role, Jones managed the ambassador program, working with the likes of John Calipari, Dick Vitale, Kevin Durant and other celebrities. He helped these ambassadors share their cancer stories to help raise funds on behalf of the V Foundation. Some of these fundraisers included auctioning game memorabilia and hosting fundraising dinners.

His new position, director of brand partnerships and influencers, is an extension of the ambassador program. However, instead of just working with famous people, he also works with famous brands, especially those aimed at millennials and Gen Z audiences. His goal is to bring a new face of donors to the V Foundation for supplement their base of typical donors and spenders.

Although Jones has had the opportunity to work with some of the biggest names in the sport through his work, he said he treats everyone the same. It’s a philosophy he’s brought to his role as Chair of the Diversity, Equity and Inclusion Committee. In the summer of 2020, he approached the V Foundation leadership team with the suggestion of creating a DEI committee to improve the organization’s hiring practices, events, guests, and sponsors. Although his term as committee chair ends later this year, Jones said he has seen tremendous effort and progress at the nonprofit.

“It’s still a daily learning process because even being a black man doesn’t make me an expert,” Jones said. “But I just wanted to help make some kind of change and I think it’s been great so far.”

Jones’ fight for change, both in diversity and cancer, goes beyond mere desire – it is a lived experience. He saw a cousin ravaged by lung cancer. Thus, he works not only for himself and his lost cousin, but for a better future for all.

“Not a day goes by that I don’t think of him, especially when I see the word ‘cancer,’ and it’s in our name – the V Foundation for Cancer Research,” Jones said. “When I see those words, I just think of him. And I hope I make him proud.

Total knee replacement market size worth $14.9 billion, globally, by 2030 at a CAGR of 6.2%: Verified Market Research®