Brixmor Real Estate Group (NYSE: BRX – Get a rating) last released its quarterly results on Monday, May 2. The real estate investment trust reported EPS of $0.26 for the quarter, beating the consensus estimate of $0.20 by $0.06. Brixmor Property Group had a net margin of 25.39% and a return on equity of 10.92%. In the same quarter of the previous year, the company had earned earnings per share of $0.44. On average, analysts expect Brixmor Property Group to post earnings per share of 1.94 for the current financial year.

Brixmor (NYSE: BRX) is a real estate investment trust (REIT) that owns and operates a high-quality national portfolio of outdoor shopping centers. Its 395 retail centers comprise approximately 69 million square feet of prime retail space in established shopping areas. The Company strives to own and operate shopping centers that reflect Brixmor’s vision of “being the center of the communities we serve” and are home to a diverse mix of thriving national, regional and local retailers. 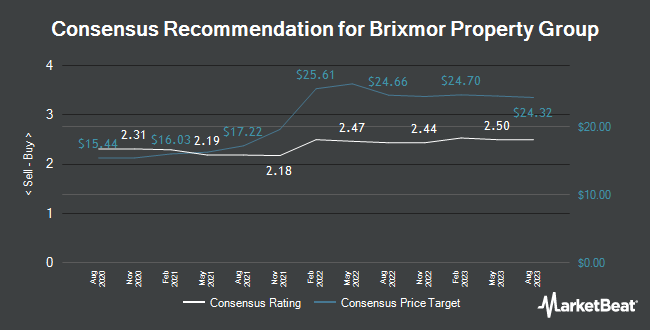 This instant alert was powered by MarketBeat’s narrative science technology and financial data to provide readers with the fastest and most accurate reports. This story was reviewed by MarketBeat’s editorial team prior to publication. Please send questions or comments about this story to contact@marketbeat.com.

Should you invest $1,000 in Brixmor Property Group right now?

Before you consider Brixmor Property Group, you’ll want to hear this.

MarketBeat tracks daily the highest rated and most successful research analysts on Wall Street and the stocks they recommend to their clients. MarketBeat has identified the five stocks that top analysts are quietly whispering to their clients to buy now before the market takes off…and Brixmor Property Group didn’t make the list.

Although Brixmor Property Group currently has a “Hold” rating among analysts, top-rated analysts believe these five stocks are better buys.

Steve Acquah co-hosts a buckyball workshop for students as part of the celebrations for the unveiling of the Royal Society of Chemistry Chemical Landmark Blue Plaque: UMass Amherst