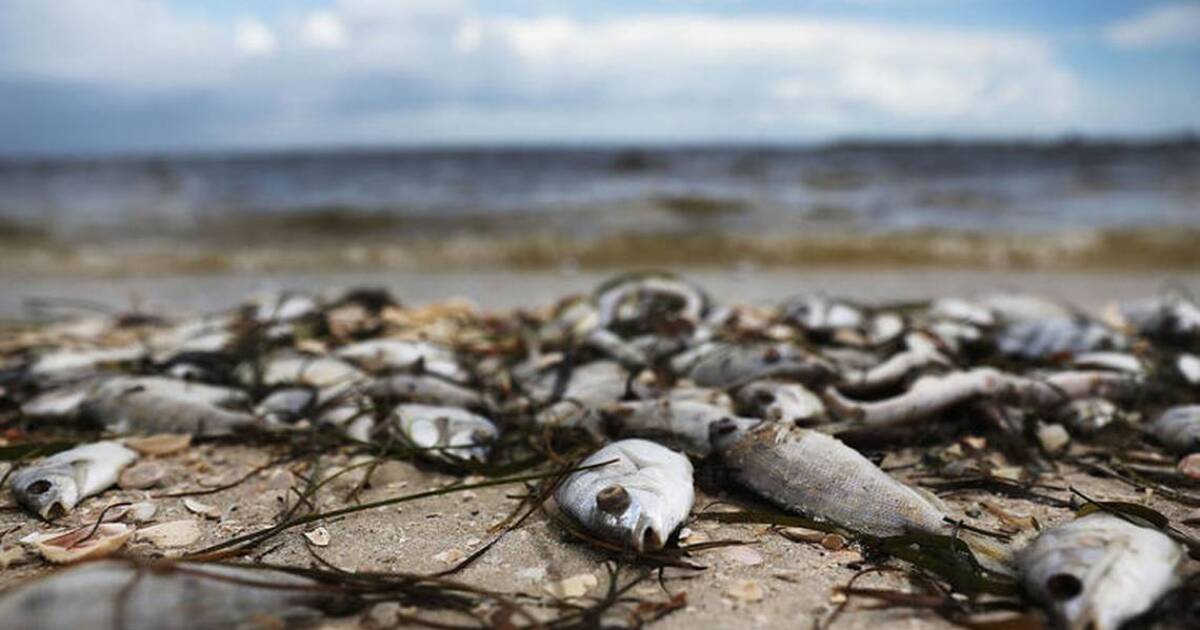 The poem, composed by an English scientist, was inspired by a University of Miami study published this month in the journal Harmful Algae which found that a third of Florida’s last 16 red tides overlapped with areas which leave the ocean depleted of oxygen. These red tide algal blooms also started earlier in the summer and extended into the fall, suggesting temperature and ocean mixing play a role.

Or, in the words of the poem:

seep through the sea –

carried by the accumulation of

Red tide algal blooms have been seasonal for centuries along the Gulf Coast. Algae live at the bottom of the gulf, far offshore, and can bloom in late summer and early fall. But when wind and water conditions carry it ashore, land-based pollution can make it worse, triggering deadly blooms like a two-year flood that devastated Florida’s Gulf Coast between 2017 and 2019.

“We’re starting to connect the dots between these different disparate events where we know the red tide is bad,” said lead author Brendan Turley, an oceanographer at UM’s Cooperative Institute for Marine and Atmospheric Studies. also a link between red tides and hypoxia. And hypoxia is really bad.

The lingering tide blanketed beaches with dead marine life, including hardy turtles, dolphins and tarpons, and shut down shoreline businesses. Another persistent and deadly red tide just a decade earlier wiped out a third of the Gulf’s red grouper population, the study found.

For the study, the researchers combed through data on ocean conditions compiled by the National Oceanic and Atmospheric Administration between 2004 and 2019 to locate areas of low oxygen levels and red tides. They found the two coincided for five years and always near shore in waters less than 165 feet deep.

While the duration of the blooms played a role, the lack of ocean mixing that can occur when surface waters warm also contributed, Turley said.

“The length of the red tide certainly has an effect, but also the stratification, this very large difference between surface and bottom temperatures,” he said. “The persistence and prolongation of this event can also really contribute to these red tides and dead zones themselves.”

This is because as the red algae die, they sink to the ocean floor where they begin to decompose, which absorbs oxygen. When the ocean stratifies, usually when surface temperatures warm, less oxygen enters the water because there is no mixing between the layers. This leaves dead zones and ocean life struggling without oxygen.

Understanding how the two potentially catastrophic events overlap is necessary to better manage valuable fisheries, like red grouper and stone crab, in the Gulf, Turley said.

“It’s still kind of a nascent science to really understand the extent of mortality at these events for fishing,” he said. “But it speaks to some of the broader ecosystem processes that actually impact fisheries.”

And something which Sam Illingworth, associate professor at the University of Edinburgh, thought should be expressed in less academic terms.

Illingworth is a scientist who has focused his research and work on trying to better communicate science. He is also a poet.

“As a 14-year-old British boy, I thought I was going to be the next Shelley or Byron, which obviously might not be a very good thing. I haven’t died of syphilis yet. But then , I did my PhD in atmospheric physics,” he said.

He has written poems about research into the decline of basking sharks, the link between green spaces and health costs, processed foods and aphantasia, a kind of blindness that prevents the brain from creating visual images.

“I guess I bring interesting, weird, weird, and inspiring research to people in a language they might be more familiar with,” Illingworth said.

The Red Tide Journal stood out, he said, because it was both well-researched and well-written. It also hurt his heart: Illingworth took a lot of family vacations in Florida.

“My mother has been to Disneyland 15 times. It’s kind of crazy,” he said.

In addition to being clear and concise, the study offered a poetic advantage: imagery.

“It’s very visual, isn’t it? ” he said. “I was like red tides, dead zones. There is a nice change there.

Illingworth included the poem in his April podcast as well as his Blog at thepoetryofscience.scienceblog.com.

As climate change warms ocean temperatures and produces more precipitation that can pollute coastal waters with pollution, Turley said scientists suspect these overlapping events could become more common. The researchers offered to look at the links for another study, he said.

This is another interest shared by the two scientists. As anxiety over climate impacts deepens, Illingworth said he has broadened his research to find ways to better empower people.

“We can lose sight of what we can do as individuals,” he said. “One of the great things that science communication does is not necessarily tell people how to think, but rather [educate] inform them of the facts and tools that allow them to process and assimilate this information, and then make their own decisions. »